I can not believe its 2012~ Can you? I am excited for the prospect of new and exciting ventures, and goals!! I ❤ me some goals 🙂 LOVE LOVE GOALS!
This Christmas vacay has been cray cray! Okay, I promise I won’t ever say cray cray again. We found out we were expecting and then lost the baby, well really it was a ball of fetal cells…not that I particularly believe that, but God came to me in a dream and it was really intense and so much that I am actually working on the really intense post to go with it! I know that is kind of a cliff hanger but God really is working with us in a huge way!

Okay any way the reason for todays post was not just another barely there keep holding post but really a revue of our budget and what that is looking like for us this year.

Obviously this will change month by month!

Extras will come from selling scrap metals and bonus’ at work! Everything else will come from the pay checks I used this budget sheet
I love getbuttonedup.com it works beautifully with my momagenda kitchen Folio!
I am excited to rock a minimalist year with lots of posts and hopefully a great open heart to God that I can share with you 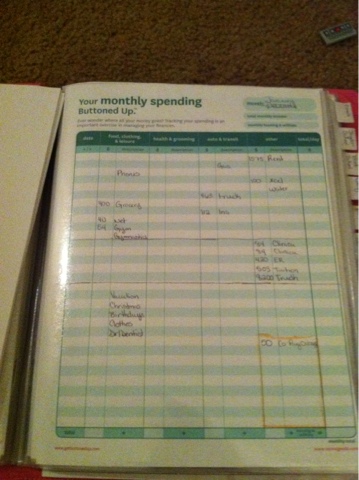 We haven’t always been in foreclosure…
Now that seems like a :duh: thing to say but it really isn’t; so many people hear about our foreclosure and think we have always been poor but that isn’t *entirely* the case.
I came from a relatively well off family. CJ came from a normal family with not much more than prayer and faith to give to their kids. We met when I was just barely 18 and he was 22. Shortly after that we lived together and a few months later I peed on a stick and there was a Jayden (actually two but one was re-absorbed). We got our own apartment (had been living with way to many male room mates :gross:). That apartment didn’t last particularly long because the hot water heater exploded causing black mold through out the apartment and me to go into labor at 32 weeks :think lots of time off work for Corey:
We moved into a lil 1 bedroom condo next. Not bad paid the rent a head of time and then my family started pressuring us to buy. So we looked. And we found a house. It was 4 bedrooms, 2 bath only 1,200 a month we could swing that!!! Yay!! So, off we went to a “family friend” who was a lender :wife was a co-worker of CJ: to get a loan! We were in a good place to buy a house I had just gotten my first trust (a sizable amount to put down on the house) we were getty but ready (plus we had been pre-approved and this amount was lower than our approval amount). Well he said 80/20 loan or bust. I wasnt signing the loan (no credit) and Corey eager to buy albeit uneasy about the situation signed…80% on a 2 year ARM rate mortgage), 20% on a balloon. So this was November 2005, in oh February of 2006 Corey lost his job (the beginning of the decline in economy) it was officially a recession. There were no jobs to be found and he applied every where. We lived off that trust for nearly a year and got married in this time period, too. We also became preggo with Brett in November of 2006. Well Corey landed a job (ish) at the mall…which didn’t amount to anything, we had nothing but we paid our mortgage on time, every month, even though in 2007 our taxable income was 12,000 dollars and our mortgage was 14,400. We often had just enough food to feed Jayden often neglecting my growing womb and sometimes without water or electricity 😦
Brett was born in August 2007 and something was wrong with him, he cried all the time, the skin was peeling off of his penis and testes, he would urinate blood and no doctors could figure it out :think medical bills:. We were desperate, drowning…then our mortgage adjusted in November 2007 to…1800 a month 😥 we couldn’t pay it. That winter Corey got a job at an apartment complex and we were able to start the process of a loan modification! There was a light at the end of the tunnel (and in the house and food in the pantry!). So, we started the process to modify the loan and they did at a low, low fixed rate of 12% making our payment 1500/month we could skate by (barely) with this payment so we did for oh 6 or so months, until the back bills caught up with us and once again we were going under. So, we stopped paying again and applied for a new loan modification, which they gave us (Corey had switched jobs in this time frame) this time the payment was :drumroll please: 1800 a month! Corey made $15 a month and our payment was $1800 a month, leaving us with $600 a month to cover elec, water, car ins, med bills from B, food and gas…ya, fucking right. So, we stopped paying, again we applied for a mod (we now had three kids) and of course they denied us (repeatedly, we kept trying) and eventually our home went into foreclosure. Now out of all that I can say we live in a gorgeous house, in a better neighborhood, we can afford, we have electricity and water and food. Our marriage is stronger than ever and life is good now (and we know what is wrong with Brett!)
I am sad we went through a foreclosure but stronger to have grown so much from the past nearly 7 years of my life. I want to learn to be frugal so I don’t have to ever worry about money again because Corey made 50,000 last year and we have nothing to show for it but debt…that’s why I’m taking this journey, From Foreclosure to Frugal

Call your mortgage company and ask for the number to loss mitigation
Call loss mitigation tell them you would like to do a loan modification
They will ask for
Previous years tax info
Pay stubs for the previous 3 months
Expense list (be honest!)
A hardship letter (your sob story)

Write, type, sign and date and put your loan number on all these things and fax them to your mortgage company three times (because if you do it once it WILL get lost)
Proceed to call loss mitigation every thursday until you get an answer. Usually 90 ish days
If they deny you, stop paying your mortgage (escrow into another account) and re-apply.

Let me start with I keep trying to write a post about my new years resolution, right or wrong it’s mine.

My New Years Goal
To be Coreys perfect wife

So I started at square one for me. I needed to be his wife, not just a nagging freaking out bitch.

Well in my exploration of this and it’s only been a month; I have learned that to make a marriage really exude Christ that you have to read like all of Ephesians 25! So dig this I’m not just to be his perfect wife but it’s his job to love me like Christ so loved his church. Well when I brought this up Coreys response was all well Christ came to correct the church :headscratch: so of course I had to research more!!!! Well Christ was a servant to his church now I don’t think Cj is fixing to be my servant but we are made to be each others servants. Its just super interesting to me that it’s not just me that is to serve him but really a two way street. I was raised in a family where men are the high and mighty!

Ephesians 25:22
Wives, submit to your husbands as to the Lord.
Ephesians 25:25
Husbands, love your wives, just as Christ so loved his church and gave himself up to her.

There is much more to this that I totally suggest we all read, I am just not typing it all out on my phone.

So while us as ‘Christians’ are willing to view our selves as higher than others and even judge other Christians based on their political affiliation with out looking ourselves in the mirror and how we treat our spouses! So much to work toward in the next year