WELL lets start with the vent! I was at Bretts classroom party and he goes to dig into the truffles I brought; I realize they are yummy and a hit so I made FORTY! He took 3 (mind you he can’t eat anything else on the table due to cross contaminants) wellll this mom who was running the party gets all up in my grill because he took 3 instead of the one she was instructing each kiddo to take. I get this can possibly pose an issue, but every other kid also has two cookies, fruit and goldfish. I just politely say well I made them for him because he is allergic to dairy and eggs. She gets all defensive and goes super loud ‘OH HES THAT KID!’ I about bitch slapped her right there and then but I stepped back collected myself and said ‘yup he is that kid’, the little girl next to him asked what that meant so I calmly told her he was really allergic to eggs sand milk and that they could kill him, her response was sooo cute…Im allergic to dust, it makes me sneeze! Well back to this lady and she is all well did you even make 25? (number of kids in class) and I said I made 40 at least and she goes well there aren’t 40 here (the two tables that had come before us all the kids took 2!) AHHHHH So that is my vent, when you know what its like to raise THAT KID and fight with doctors and worry about reactions, then you can step to me, until then bite me. Oh and lady stop acting like you’re five years old too.

I used my kitchen aid mixer and put all the Oreos and tofutti in and let it mix. Once well mixed use a spoon and spoon out mixture and roll into balls and place on parchment paper. Repeat 40 ish times 😉 place in fridge to set for at least an hour. Remove roll in sugar, put back in fridge for at least 15 minutes. Eat!! 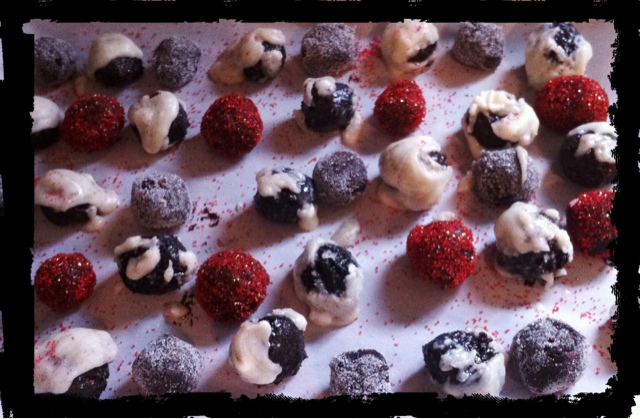